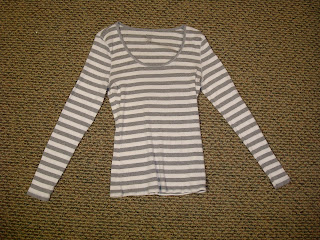 I have had this large long sleeved t-shirt for about a year. I paid $2.99 for it at the Salvation Army and appeared to be new. I had thought about embellishing it with a flower or two but could not come up with a original or cute idea so I decided to make a cardigan out of it. So lets get started and upcycle another piece of clothing! First I laid the shirt out and measured from under arm to under arm to find the exact center. 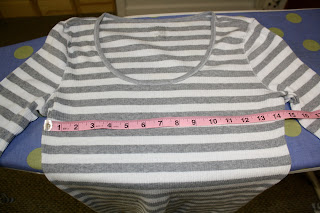 Once I found the center, I cut right up the middle. This step always makes me nervous ever since I was a child and tried to cut a collar on a coat to make it narrower. It was a disaster but I try not to think about it that much and just cut. 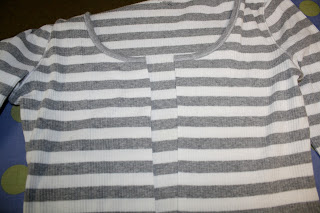 Once it was cut, I decided to use the hem from another t-shirt that I had cut up for another project. 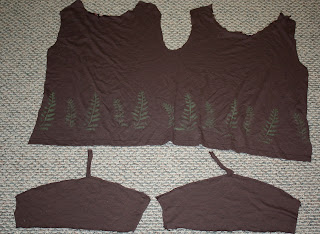 I cut two pieces of the hem of the t- shirt long enough to cover the edge of the cardigan and wrap around the top and bottom edge. I folded over the edge and pinned 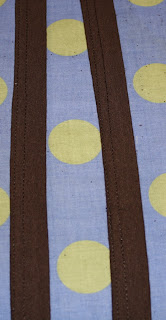 Then I pinned it to one side of the cardigan. Making sure to fold over the top and bottom.

I then ran it thru my sewing machine with brown thread and using the hem stitch to guide me with my sewing. I repeated the process on the other side and was surprised by the results! 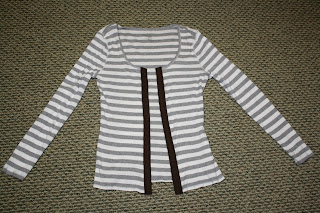 So different and now it is a cardigan! I love it and wore it over the weekend and plan to wear it to work this week since layers are a good thing! 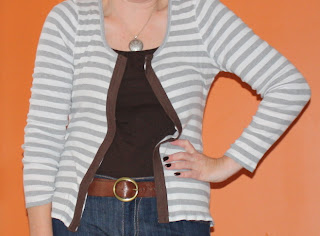 Popular posts from this blog

February 26, 2012
I like to watch tutorials on my Ipad and although I have a cover that converts to a stand, it isn't always the best solution for viewing. So I decided to make one of my own inspired by these Iphone stands I found on Etsy. They are sold by dognamedbanjo and are really unique and lovely. So I thought I could make one similar to it and here is how i did it. First I started with a 1 yard of a fabric in my two favorite colors. Then I cut the following pieces 1 Pc 13" x 13" 1 pc 29 x 13" 2 Triangle pieces 13" x 13" x 13" Next I sewed the top square to the two triangles. This is will be the sides and the base. Next I took the large rectangular piece and sewed it to the bottom of the square. Now I don't have photos of the last few steps since once it start forming a pillow it is difficult to photograph, but the process is not that difficult. Next I sewed each side of the the rectangle to one side of the triangle on both sides. Then repeated the same proc…
19 comments
Read more

February 12, 2012
My obsession with mannequins continued this week when I remembered a free pattern for a tiny dress form pin cushion that I saw back in January.
It's a two page download at www.thediydish.com with a video that takes you thru step by step of the process. I wanted to make a few of these for my craft room but thought they would also look lovely adorned with my recycled jewelry. So I started by selecting a few fabrics in colors that I love. Blues and greens are my favorite and make me feel like spring is not far away. After cutting and sewing the simple patterns and easy instructions (via video), I had these three stunning ladies in my craft room. They require very little fabric and can be mounted on candle sticks or spools. I made the long green dress form about 4" longer than the pattern since I wanted a bit of height and enough space to hang pedants. I added glass drawer knobs and beads for the neck inserts. I then added a few necklaces. I chose just a few since the forms are…
9 comments
Read more

November 21, 2011
I found a large stash of Neck ties at an Estate Sale this past weekend and I had to buy them since I had the perfect idea for an upcycle project. They were mostly from a long since closed store here in Buffalo,NY and I felt the need to preserve them as well as the tags. I started by washing them on gentle and removing them immediately and laying flat to dry. They came out a little disfigured but nothing that a little ironing wouldn't fix. Next I took a seam ripper and opened up the back to take out the interfacing. I did this for two reasons, it was discolored and had a little odor and it would be easier to sew without this bulk.  I next cut the tie into a piece 10" long and hemmed the edge. Then I sewed two pieces of velcro to each side to make my cuff. The last step was to sew on a few antique buttons and beads and my cuff was done. Wow! Looking at this I can't believe how it turned out!.But wait... I made a few more! Love this one.. Antique Maple leave button and golden bead! …
6 comments
Read more